Raise Your Hand if You Iron

I don't know many people that do much ironing. With the advent of wrinkle-free fabrics, dryers with wrinkle-guard settings and ironing sprays that claim to take the wrinkles out, I don't think there's as great of a need for a person to be proficient at ironing. 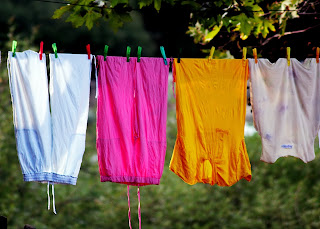 Photo courtesy of clarita at Morguefile.

I bought another copy of McCall's Magazine. (In my last post I talked a bit about what I had read in the November 1954 edition of McCall's.) It seems that in August of 1953, ironing was a hot topic. The magazine offers several tips. Here are a few:

Thankfully, we've gone beyond having to dedicate a day to the mundane task of ironing. My iron has a steam feature and an automatic shut-off, as I'm sure most modern irons do, so there's no need to soak clothing in warm water in plastic pillowcases. For the times when the steam feature isn't quite enough, a couple of squirts of water from a plastic spray bottle does the trick.

Starch has also become a thing of the distant past. With the exception of the occasional spritz from a can of spray starch, it's not something that typically gets used in my house. I've never had to mix starch like the 1950's housewives did.

Still, modern technology in irons and fabrics aside, there are times when even us contemporary folks need to iron something. That's when we are fortunate to have the Internet to consult websites like Martha Stewart's for tips on how to iron things like shirts and tablecloths. Dampness is still key, though it's accomplished much easier than it once was. And, according to Martha, using a lower temperature will help avoid a sheen on the fabric. That's new to me. I bet the 1950's housewife didn't even have a temperature choice!

Ironing isn't something I do much. I don't enjoy it and I don't intend on doing it any more than absolutely necessary. It's good to know that our modern technology has saved us from the worst of this task. For that, I'm grateful. How about you?