On Tuesday, I saw Rachel Kaplan speak about her book Urban Homesteading: Heirloom Skills for Sustainable Living. I walked away feeling totally inspired and motivated to take my little backyard garden to the next level.

I learned urban homesteading is about more than backyard gardening. People at the forefront of the movement are getting creative to find ways to conserve energy and water while producing their own food and herbal remedies, among other things.

Some of the things that are happening in the U.S. are pretty fascinating. Progressive urban areas, like NYC and Seattle are allowing residents to own chickens. People are building rooftop gardens or coming together to maintain community gardens.

I love how the Urban Homesteading site defines the movement. Here's what they say, "Urban Homesteading is a growing movement in this country, part of the global re-imagining of culture on the other side of governmental indifference and corporate greed." 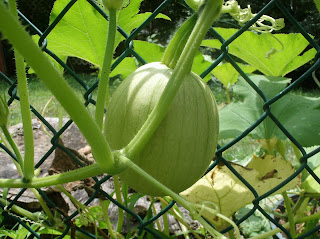 As a kid in the 1970s growing up in a rural area, I saw first hand the skills that were needed to help feed a family. My mom planted a large garden every year. She canned beans, peas and tomatoes. We picked berries out of our own backyard until our faces and hands were purple. Sometimes she bought a half a cow to freeze. My grandparents owned chickens and had an even bigger garden. Many of the local families did the same. Nobody thought twice about seeing the chickens walk casually across the road at Whiteford's farm on the upper end of Main Street in our little village or about the occasional cow that got loose and wandered around.

Yet, somehow, we've lost it. As people moved to more urban and suburban areas, they stopped doing all these wonderful things. Not only that, but some municipalities made laws that disallowed citizens to own farm animals, like backyard chickens and goats. Some cities dictate where citizens can grow vegetables on their own land.

The crucial homekeeping skills of gardening and preserving, once so crucial, have skipped a generation or two. Now, we're turning to the Internet to re-learn homesteading skills. People are being creative out of necessity to achieve incredible results in the small spaces of the urban landscape. And, slowly, urban governments are becoming more progressive and in favor of sustainable living.

One of the coolest things I learned from Rachel's talk was that wanna-be urban homesteaders need only start from where they are. You can go from growing nothing but lawn and a few manicured shrubs, to growing a small garden of your choice. Add more every year until you get to the level you're comfortable with. Work with your neighbors. Focus on animals, like chickens or goats, if that's more your style. Or, become the neighborhood's master composter. There are many ways to do it and many ways to become a part of a greater community of urban homesteaders.
Posted by Barb at 10:16 AM